In regard to my last post from January 28th regarding the facial reconstruction of King Richard III, my eighteen year old son Aryeh looked at what I was doing and had this reaction.”Dad, that face sure looks familiar.”  I looked at him incredulously and said “what do you mean?

I then explained to him that this was a facial reconstruction based on elaborate forensic craniofacial identification analysis. It was done on the skull of Richard III that was unearthed several years ago under a car parking lot in Leicester, England. Geneticists and archeologists from the University of Leicester confirmed the royal identity saying the DNA from the skeleton matched that of a descendant of Richard III’s family.

This facial reconstruction was the brilliant work of Caroline Wilkinson, a Professor of Forensic Craniofacial Identification at Dundee University.  In 2013, she used an array of very advanced 3D Imaging technology to painstakingly reconstruct his facial features.

“Do you want to here how accurate this is?” I asked my skeptical son. “Then listen to this from the BBC News.  According to Dr. Wilkinson,  ‘our facial reconstruction methods have been blind tested many times using living subjects and we know that we can expect that approximately 70% of the facial surface should have less than 2mm of error,’ ”

“Well, maybe”, he said, “but I think that the professor actually copied it from Lord Farquaad in Shrek!  “What on earth are you talking about?” I exclaimed in a slightly annoyed tone of voice.  “Well”, he said, “look at this!”

With several deft clicks of the mouse, he suddenly showed me a side by side comparison of Professor Wilkinson’s scholarly research next to a computer generated snippit of animation taken from the full length feature film Shrek released in 2001. Blimey!  It was practically a carbon copy of the cartoon character. 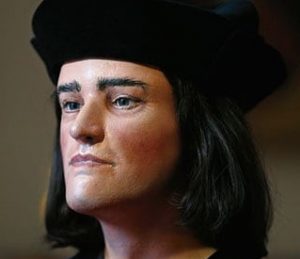