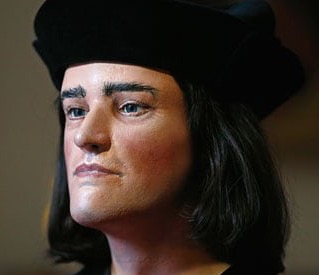 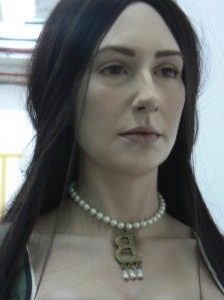 Volume I of Past Lives of Famous People concerns the current British Royal Family.  As Linda was channeling and I was doing research on the wives of Henry VIII,  I came across a group of artists and scientists involved in the fascinating field of facial reconstruction. This is done from a wide range of sources ranging from paintings, drawing, and skeletal remains if they are available.

Anne Boleyn was the second wife of King Henry VIII.  Although she would give birth to her daughter Elizabeth I, who would go on to become one of the greatest Queens in British History, that apparently was not enough for Henry.  Anne was unable to produce a male heir that Henry VIII so deeply longed for.  She was beheaded on trumped up charges of adultery.

Recently, a wax sculpture was done of Anne Boleyn by special effects artist Emily Pooley.  It is currently on display at Hever Castle in Kent near Edinburgh.

Anne of Cleves was the daughter of the Duke of Juliers-Cleves, Johann III, and the sister of his eventual successor, Wilhelm. She married Henry VIII to become his fourth wife.  He was anxious to seal the deal because he was in desperate need off new allies to go against his two great rivals, the Holy Roman Emperor Charles V and the French King Francis I. Unfortunately, Henry agreed to the deal without actually first meeting his bride to be. 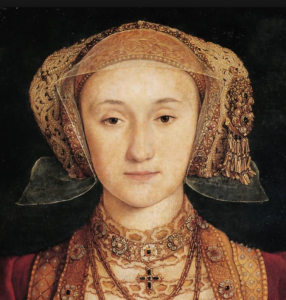 Instead he decided to commission Hans Holbein the Younger to paint a portrait of Anne so that he could see what he was getting into.  Obviously, some sort of communications breakdown must have occurred between Henry and Holbein as the king was was interested in an accurate portrayal while as the painter was interested in making her look picture perfect. It is easy to see how Henry could have decided to move forward with a treaty with Johann III.  Alas for Henry, Holbein’s portrait depicted the young woman to be a fair maiden.

After the treaty was signed and he finally met her, he was utterly repealed by her looks.  Although beauty is in the eye of the beholder Henry believed that the Holbein portrait was a case of deceptive advertising.  The poor girl had a bulbous nose that was much bigger than the portrait suggested and her face was riddled with pockmarks from smallpox.

He refused to consummate the marriage and screamed to Prime Minister Cromwell, “I like her not.”  Nevertheless, a deal was a deal and there was no turning back.  So Henry decided the best course of action was to get the marriage annulled on grounds of not being consummated.  This occurred six months later whereupon he sent her off to live in a secluded country estate. 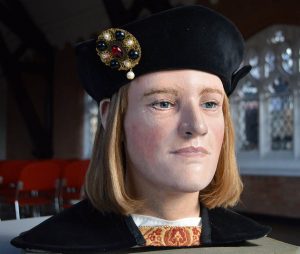 Here is the recent facial reconstruction of King Richard III, the last of the Plantagenet kings. His skull was recently discovered  under a  car park in Leicester. The monarch was only 32 when he died on the Bosworth battlefield.

The face was reconstructed after detailed scans were taken of the skull by Caroline Wilkinson, professor of forensic craniofacial identification at Dundee University.  http://nationalpost.com/news/facial-reconstruction-reveals-king-richard-iiis-handsome-facial-features-after-skeleton-was-found-under-parking-lot.

To learn more about this fascinating field of facial reconstruction see this video at https://www.youtube.com/watch?v=6G0LvImAGAg. If you are captivated by this, you can then take the next step.  There is an excellent free online course from The University of Sheffield that is available to the public.  https://www.futurelearn.com/courses/forensic-facial-reconstruction.

Oh! and an updated news flash…although not about royals, it was royally entertaining.  A week after I posted this blog, another news story appeared on BBC describing a prehistoric British man dubbed ‘Cheddar Man’ whose facial features and other attributes were reconstructed by a team of scientists and artists.  They even used his DNA to make certain assumptions about what he really looked like.  This included a darker hue of skin, blue eyes, and the fact that he was lactose intolerant. Amazing!